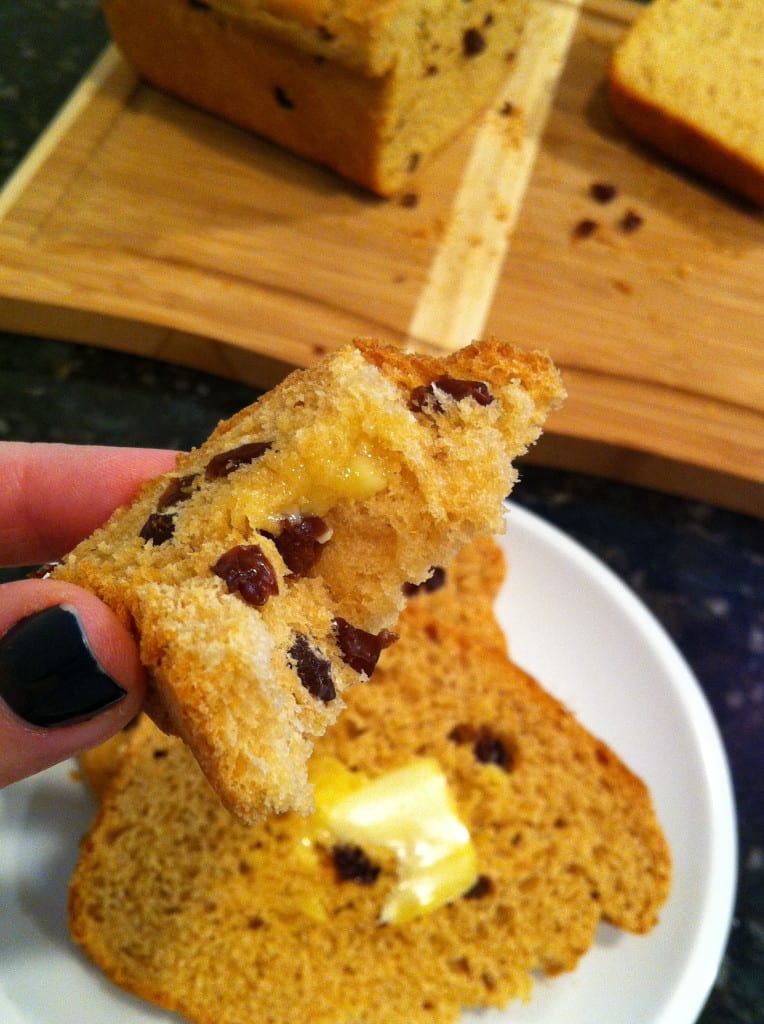 I’ve been on a carb kick recently (hence the Raisin Bread), which has been so delicious but so against the pre-wedding “diet”. My “diet” is more like a mantra: Don’t eat so much bread and so many sweets! It isn’t working. Obviously.

When I was younger and my metabolism and I were still on friendly terms, I used to eat entire loaves of Sun maid Raisin Bread. I was a girl obsessed! I am fairly certain that my Mom thought I was a just a little crazy, but who can eat just one (or three) slices of moist, cinnamony raisin bread? Not this girl.

I found this recipe in the American Woman’s Cookbook and I knew it was no use fighting the urge – I had to make it! It was every bit as moist, chewy and flavorful as I hoped it would be!

I am not going to get all crazy with my instructions for how to make bread because my post on Whole Wheat Bread is extremely detailed, and it is an excellent reference tool for bread making.

Add shortening, molasses and salt to hot milk and stir until all shortening has melted. Let this mixture cool until it is lukewarm (100 ° – 110°).

While the milk mixture is cooling I like to proof my yeast Add ¼ cup of warm water (100 ° – 110° F) to the yeast and stir to mix. Then add 1 teaspoon of sugar to proof the yeast. Wait 10 minutes and if the mixture has tripled in size, then the yeast is healthy & ready to use.

Add yeast to the milk mixture and stir to incorporate. You can either mix the rest in a standing mixer on speed two or you can continue to mix my hand with a wooden spoon. Add the flour cup by cup until the dough clings to the hook and cleans the sides of the bowl. Add the raisins (I forgot, which is why they look so unincorporated! No worries, they still tasted wonderful). 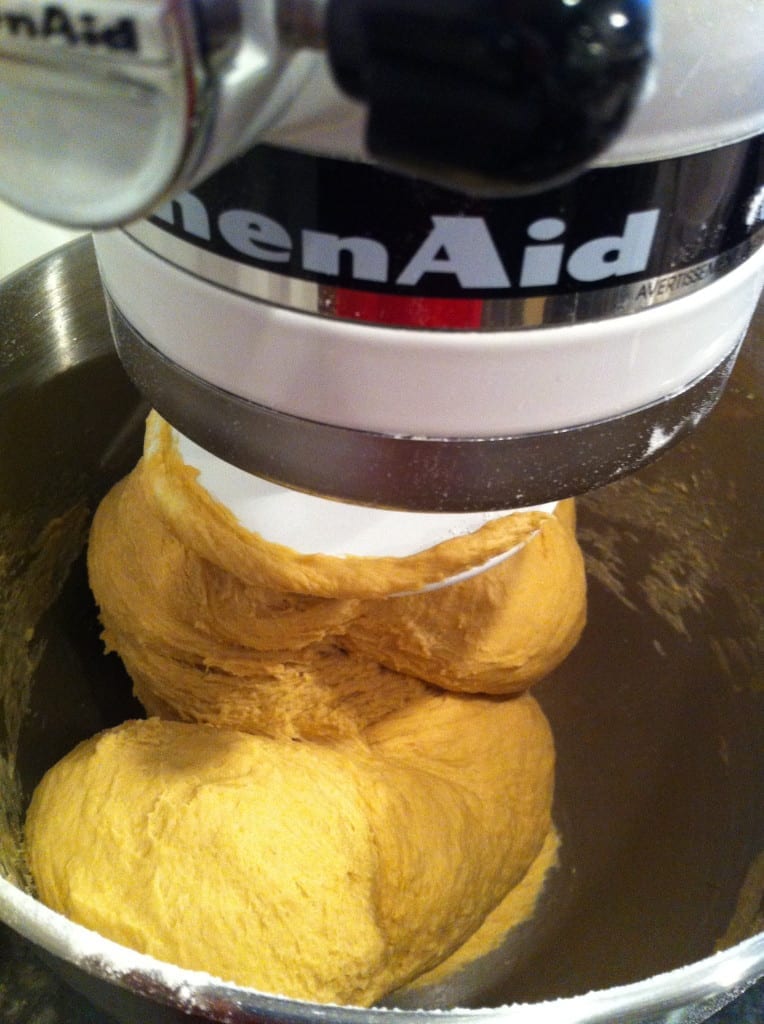 Kneed for an additional two minutes on speed two or turn the dough out onto a lightly floured surface and knead until the dough will no longer stick to an unfloured board. 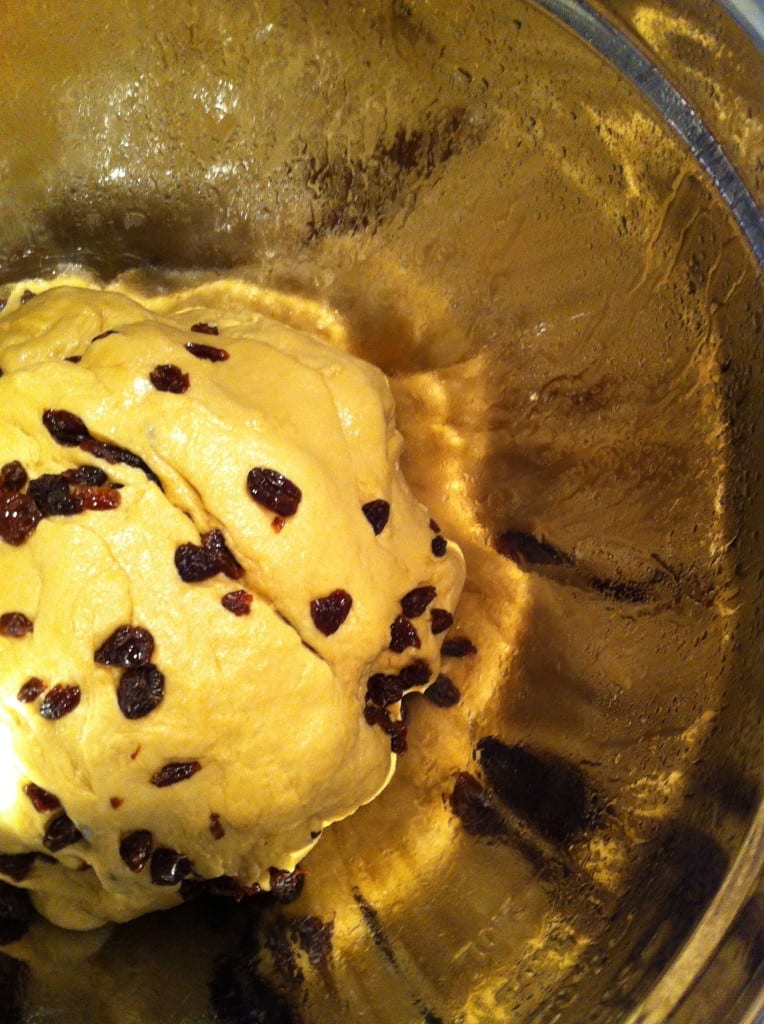 FIRST RISING – Grease large bowl with vegetable oil. I pour a little oil in my hands and then spread the oil over the insides of the bowl with my hands like fingerpainting, or you can spray it with an oil mister (thank you Christmas). Place dough in bowl and turn the dough in the bowl to cover all sides of the dough with oil. Cover with damp towel and place in a warm place (80 ° – 85°) for an hour, or until the dough is triple its size. There is no warm place in my condo at this time of year, so I pre-heated the oven for 10 minutes and then let it cool down to a comfortable temperature.

SECOND RISING –  This step is optional but as Ruth explains, “This second rising is…worth while because it improves both the texture and flavor of the bread.” I took my bowl from the oven quickly to avoid too much heat escaping, punched down the loaf. Let the dough rise for another hour.

SHAPING THE LOAVES – Separate the dough into two halves. Woman’s Cookbook says to fold the sides underneath the loaf and squeeze to elongate the dough to the size of your pan. I have found that you can also just plop the dough in the prepared pans and call it a day. Place shaped dough into well-greased pans. Let rise until doubled in volume.

Try to let them cool before eating. This is the hardest step. This bread was just as flavorful and light as all the other breads I have made from the American Woman’s Cookbook. 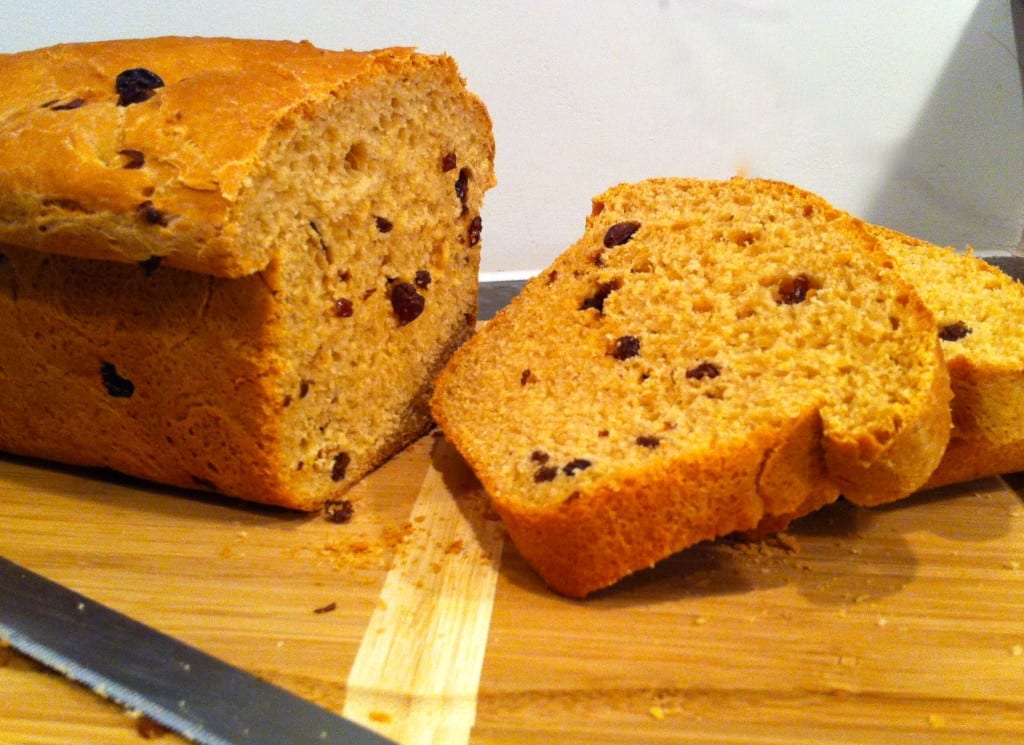 The best part is that this bread will take the shining roll in a dessert later this week!! I can hardly wait!