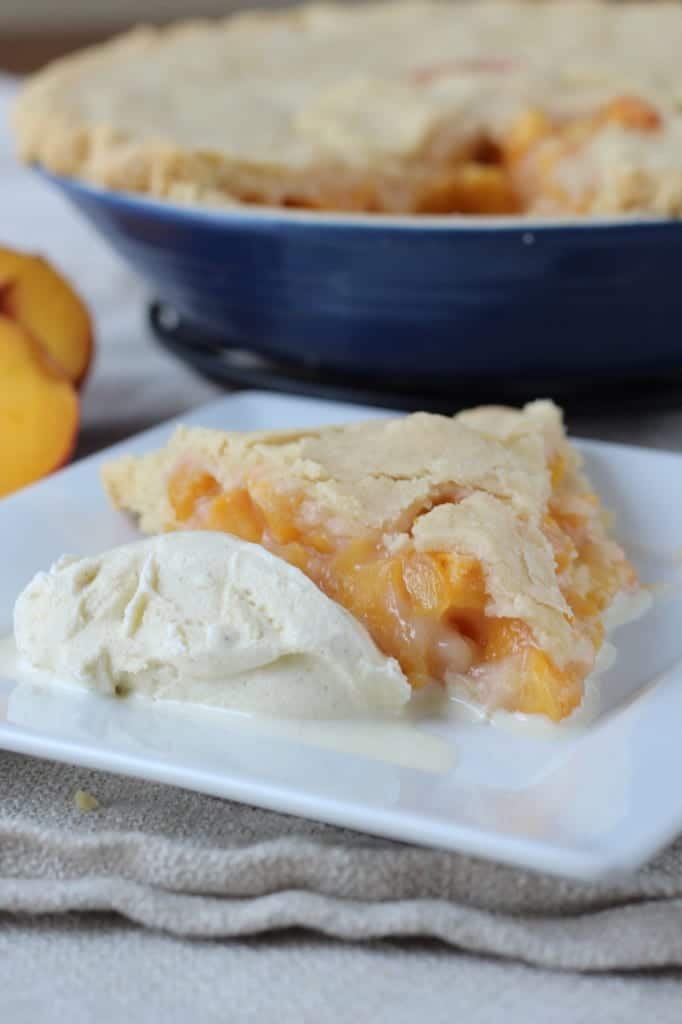 There are a few things in this world that I cannot resist. Peach Pies and kittens are two of them! My fiancé brought home a stray kitten several weeks ago. The kitten had been hanging outside of one of his rental properties and he seemed sweet and hungry, so we brought him to the Vet, and then took him home with a clean bill of heath. 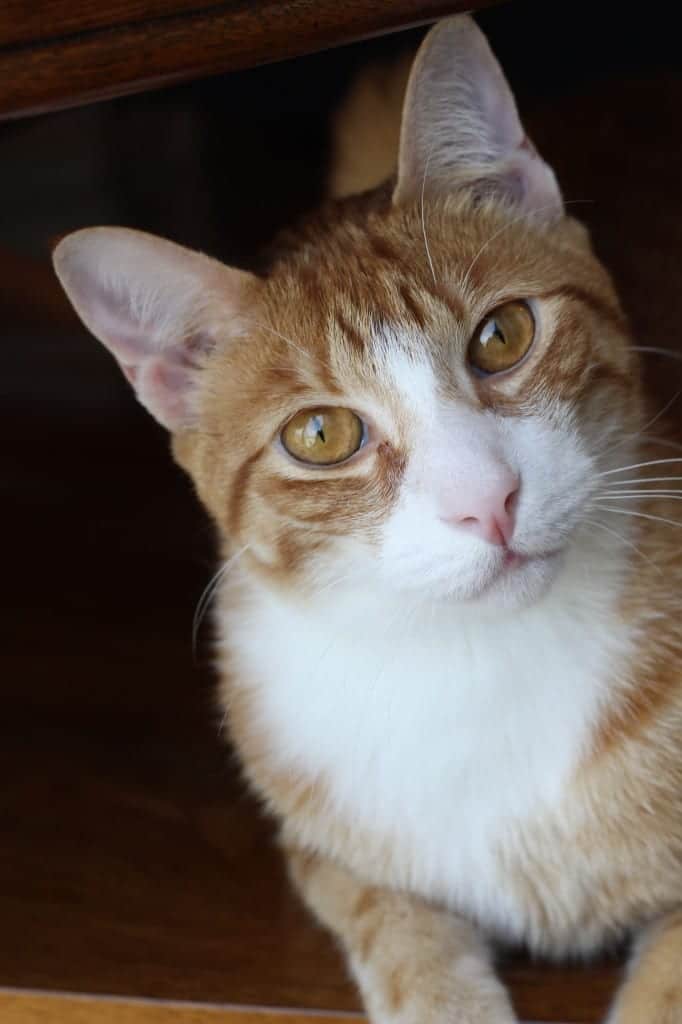 This would all be perfectly fine except I already have a cat. I can’t believe I haven’t told you about her! She’s adorable! Her name is Mini (short for Mignonette, if you’re curious) because she used to look like a perma-kitten. 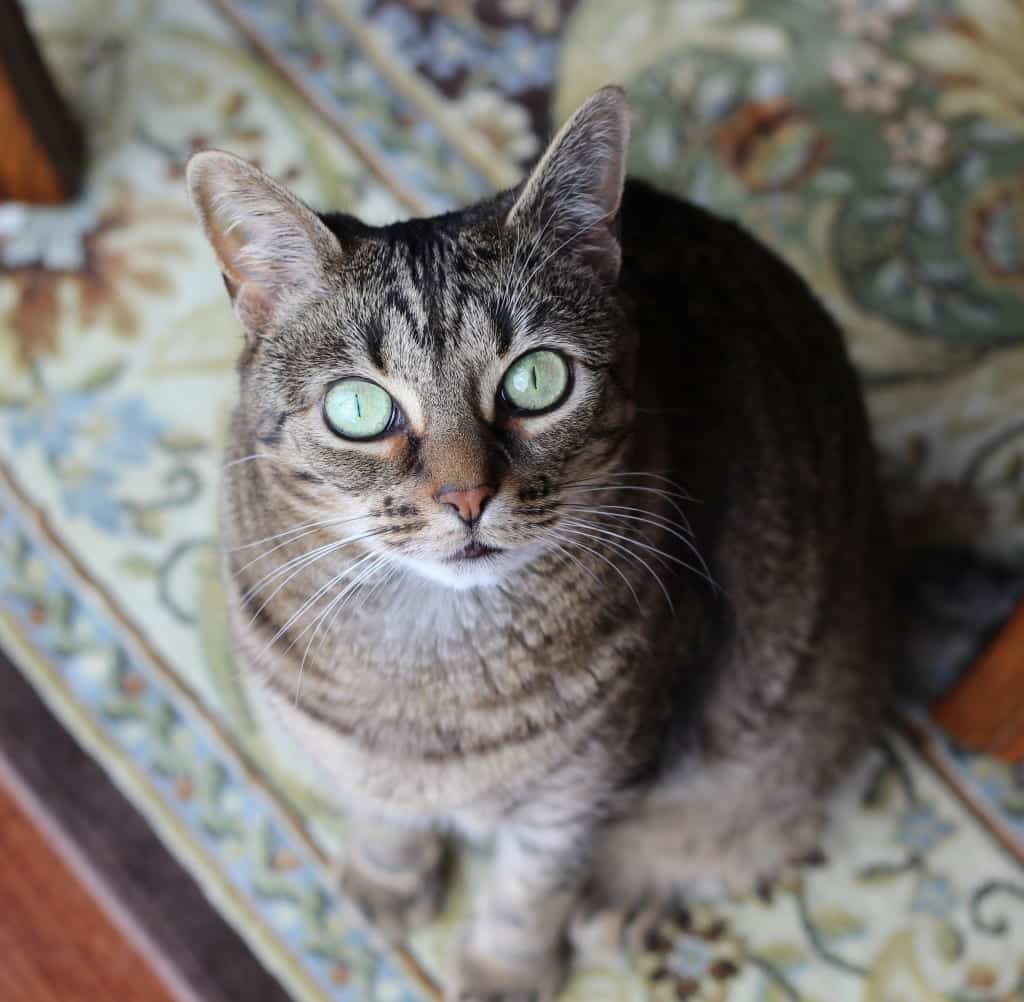 But Mini’s a little on the pudgy side now, so we thought a spunky new kitten might be just the ticket. Or not… 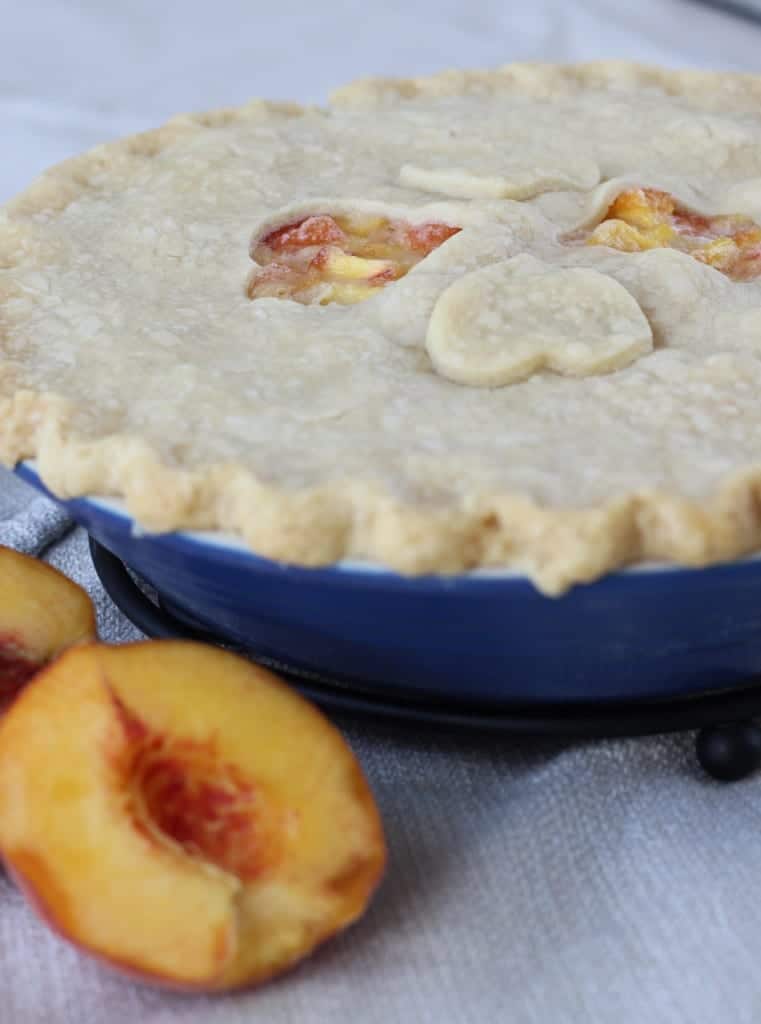 Fortunately the Old-Fashioned Peach Pie worked out better than the new kitten. The crust was flaky and the pie filling was perfectly sweetened. I used an heritage recipe from One Big Table by Molly O’Neill. The Peach Pie recipe is from Coletta Boan in Winston-Salem, North Carolina where I went to university. I loved that the filling was cohesive but the added flour did not make for the prettiest thickener. 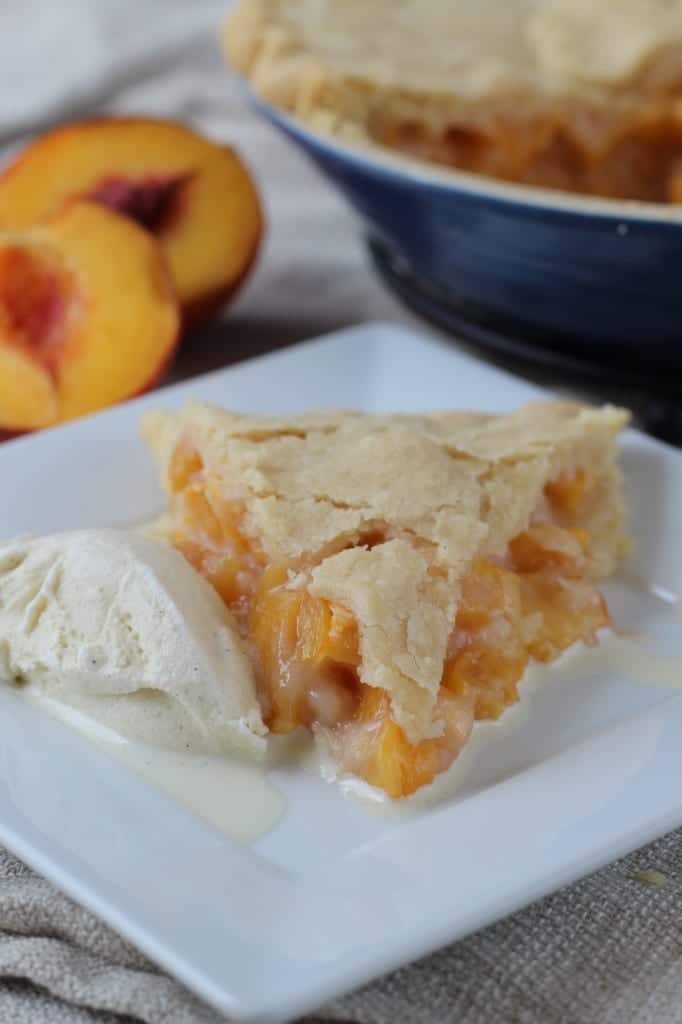 I decided to try a more traditional pie crust recipe from my favorite Good Housekeeping Cook Book, 1955 edition. All the pastry recipes from the early to mid twentieth century use 100% shortening, and this recipe is no exception. Shortening does make a wonderfully flaky crust when prepared right, but it’s definitely less rich than those containing butter. The crust is reminiscent of the frozen Pillsbury crusts but more flavorful and flakier. This pie would also be sensational with this fool-proof crust or the American Woman’s Almond Pie Crust. 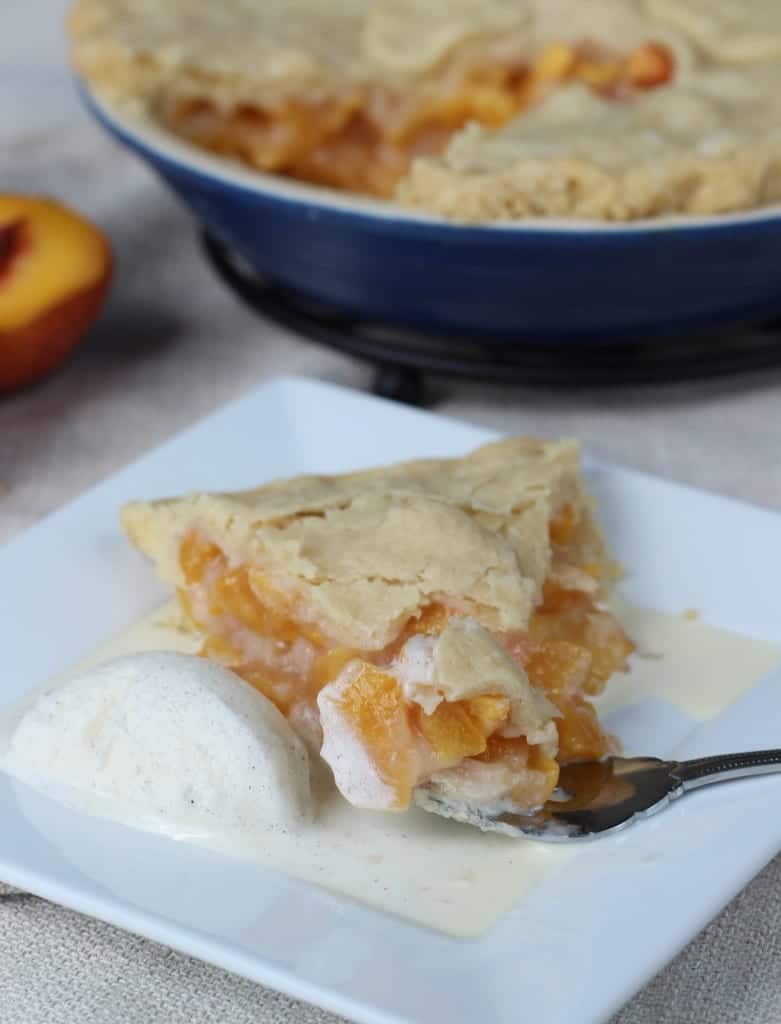 Back to the Orange Kitten (~8 mths). If you live within 100 miles of Atlanta, GA and are looking for an orange kitten (neutered), then you are in luck because I have a feisty one in need of a good home! 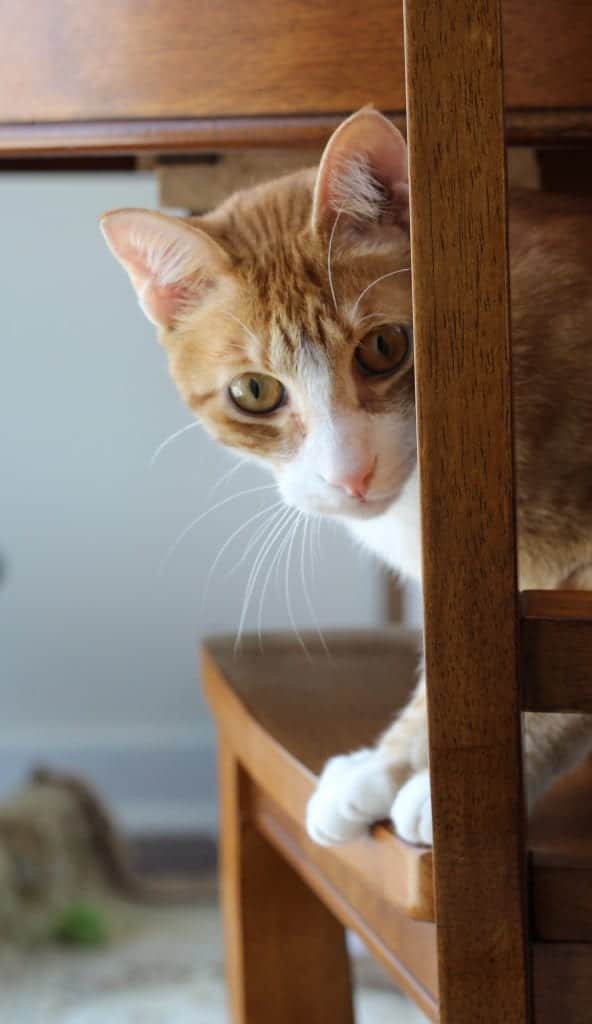 One Big Table by Molly O’Neill

1 unbaked pie shell (I made a double crust pie, but Coletta didn’t)

Place peaches in pie shell. Mix sugar, butter, flour, and egg until smooth. Pour mixture over the peaches. Do not stir into peaches. 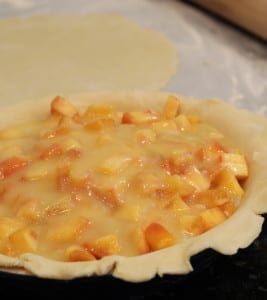 Cover with your top crust (if you choose) and decoratively crimp the edges. One of the good things about an all-shortening crust is that it doesn’t shrink in the oven! 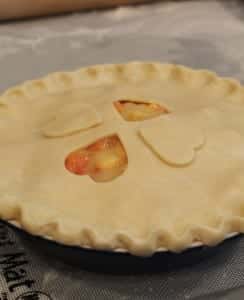 Bake for 1 hour and 10 minutes. If you want a browner crust preheat the oven to 425°. Reduce the heat to 325° after 30 minutes of baking. You may need to cover the edges / top crust to prevent over–cooking! 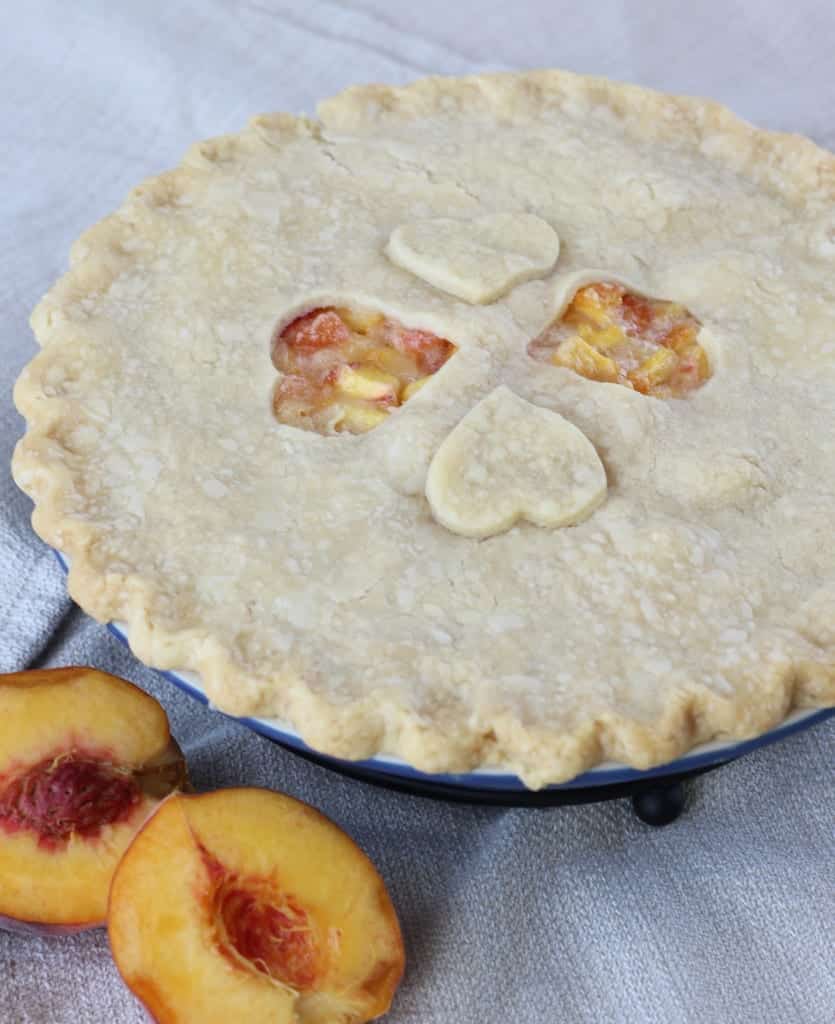 In a bowl mix flour and salt. Cut shortening into cubes and pour into flour mixture. Cut the shortening into the flour with a pastry blender or two knives until the mixture resembles coarse crumbs.

Add water 1 tablespoon at a time and blend with a fork until the dough just holds together and is no longer crumbly. If you are making two single crust pies, split the dough in half. For double crust pies I like to split the dough 2/3 and 1/3. Refrigerate the dough for ~30 minutes before rolling. 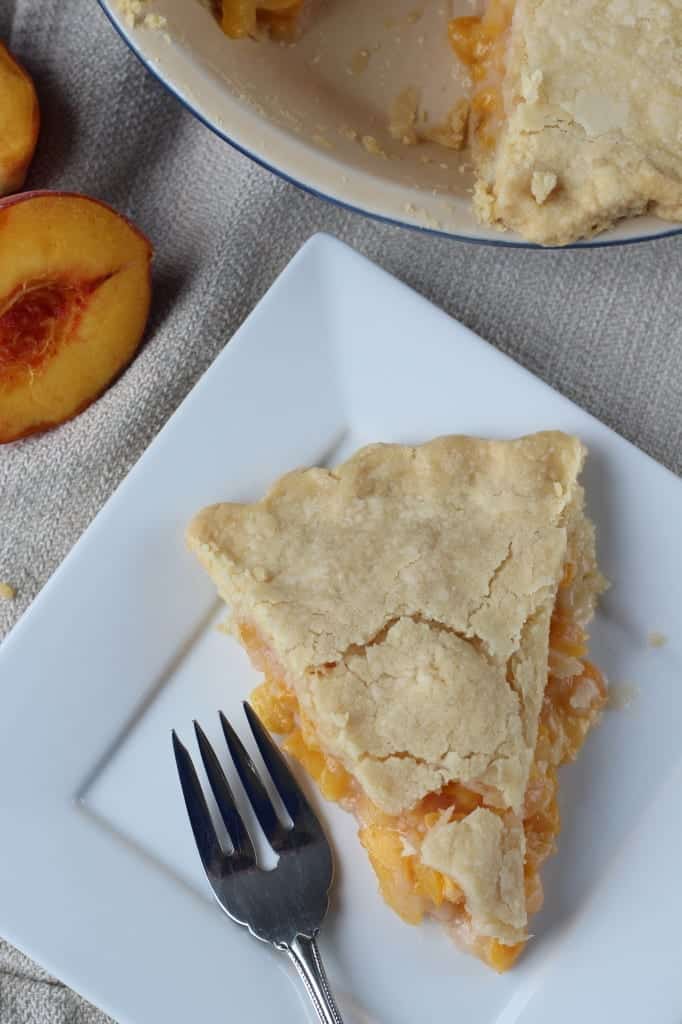 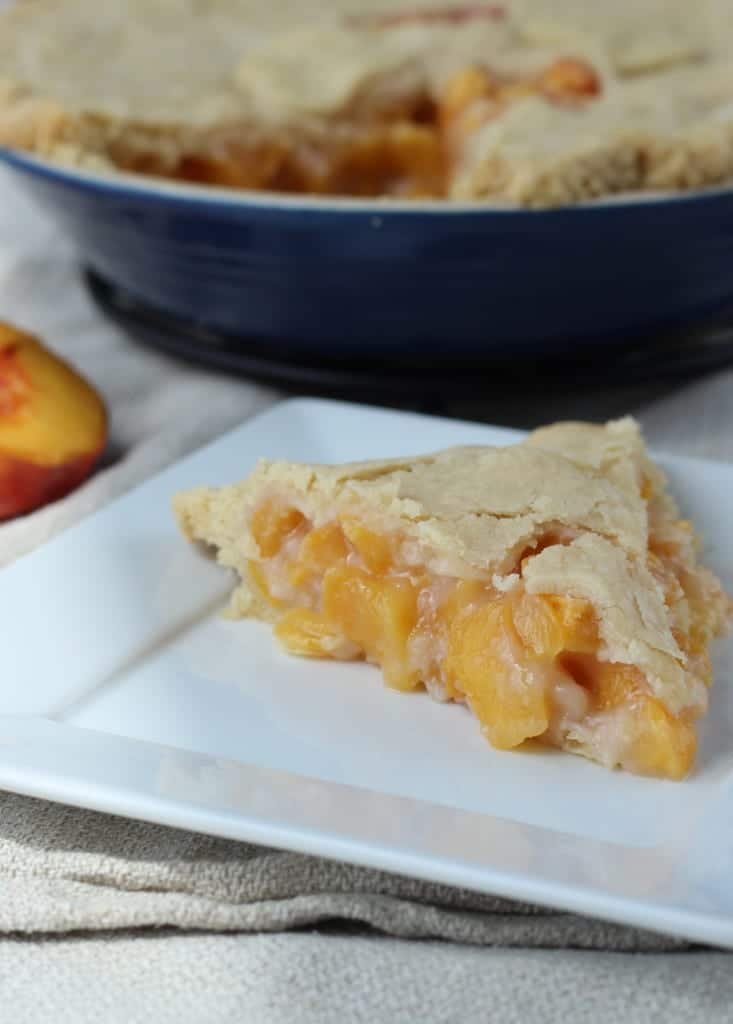