You won’t want to miss my Apple Sage Sausage Stuffing! It has a little sweetness from the apples and apple cider, a little spice from the hot Italian chicken sausage, savory flavors from the leeks, onions and a generous amount of fresh herbs, and a little sprinkle of toasted pecans for crunch! 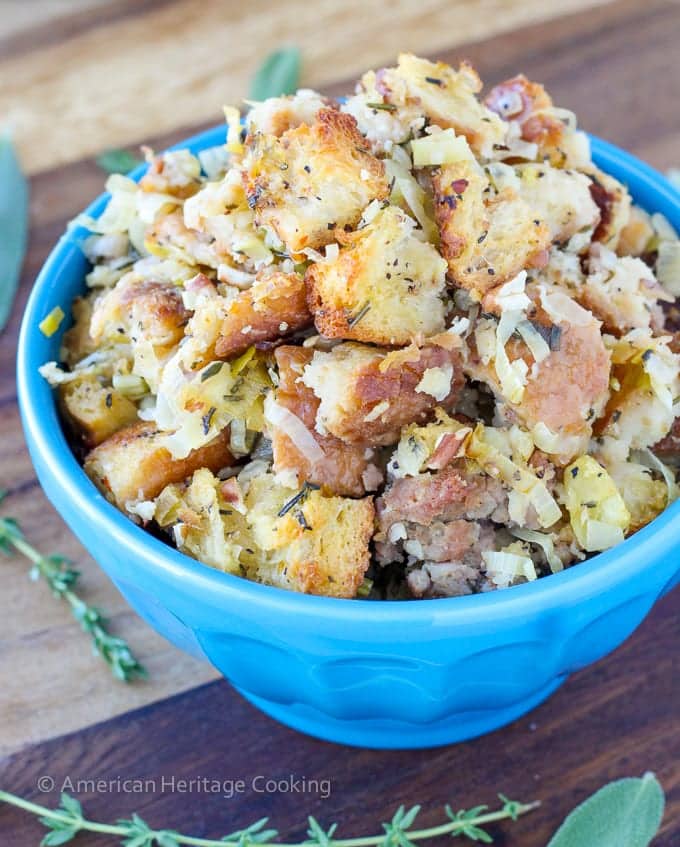 This is the best stuffing that I have ever had. 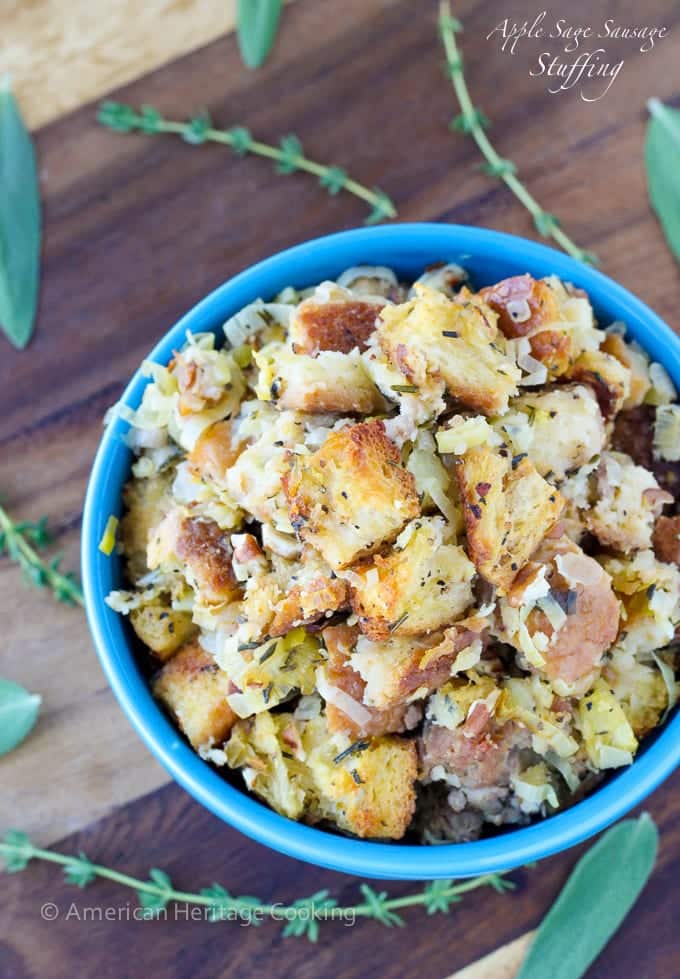 It’s got the trifecta of stuffing goodness: sausage, sage and leeks.

I threw some apple cider in there just to hit the flavors home. 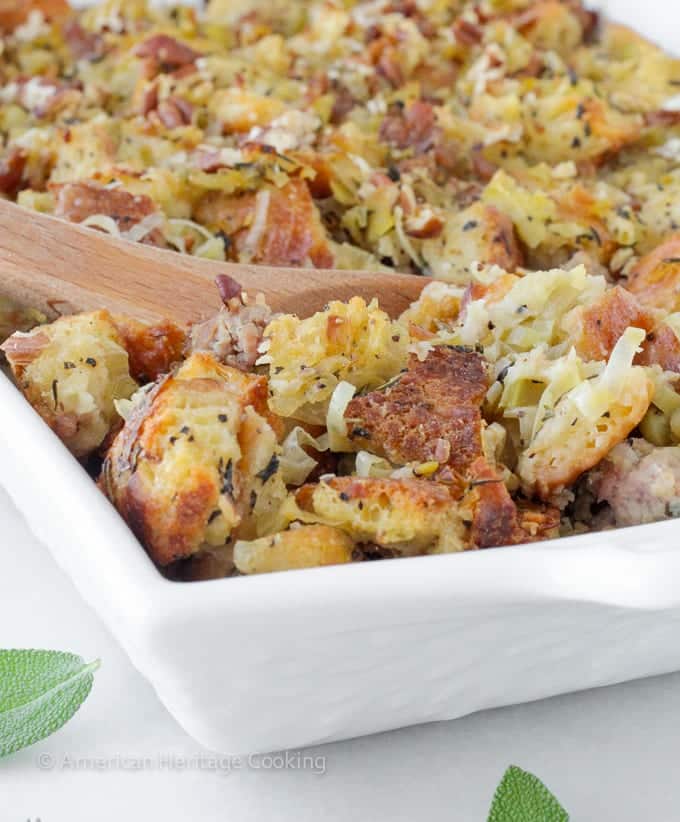 The spicy Italian sausage gives it a little kick but you could absolutely use sweet Italian sausage. My husband disdains sweet sausage, so that is no longer an option around here. You only make those kind of mistakes once.

Or twice but who’s counting?

Whatevs. We can’t agree about everything. 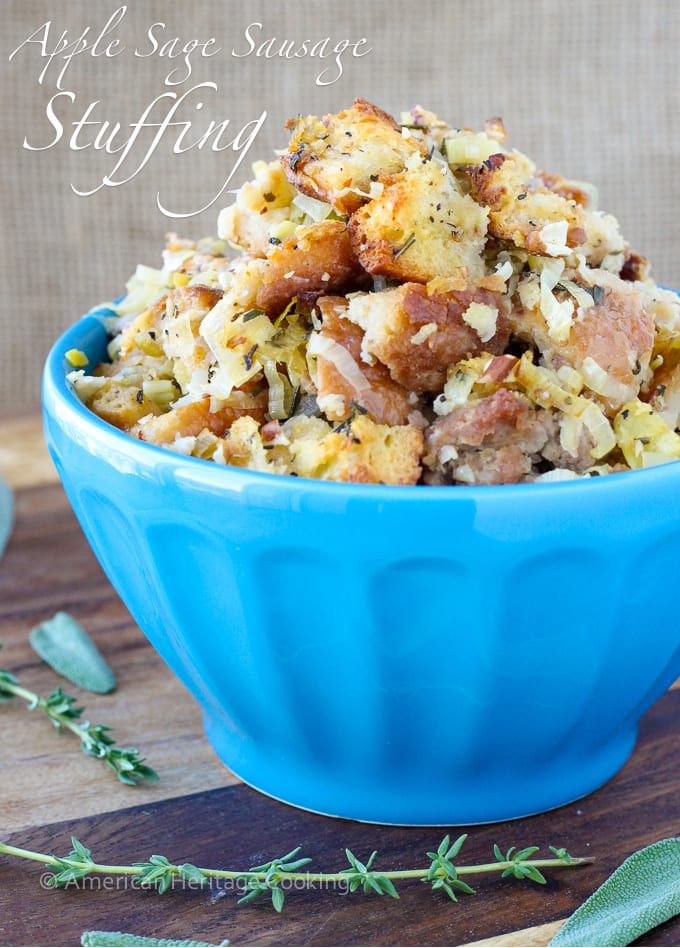 But we do agree that this stuffing rocks. I ate it cold, I ate it straight from the oven, I ate it warmed up, and I mourned it when it was all gone! 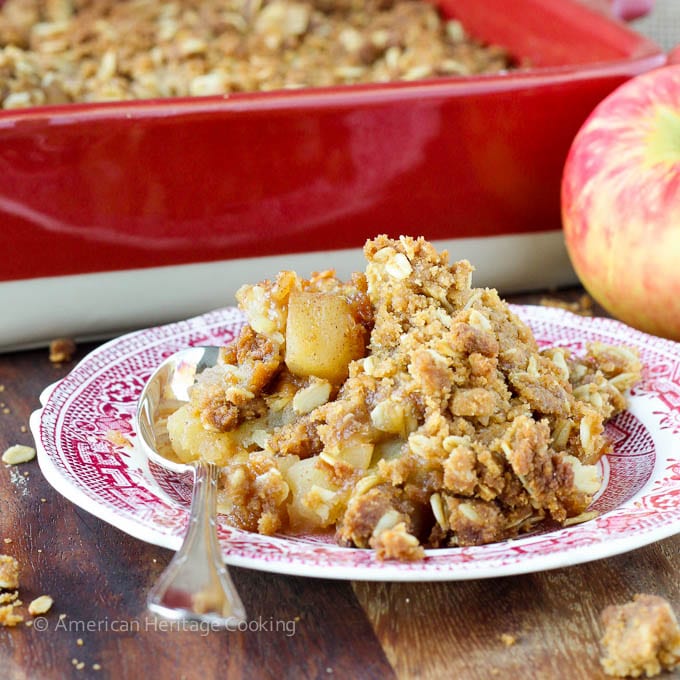 There were two desserts that my mom made all the time for as long as I can remember. My favorite was this Brown Sugar Apple Crisp.

I think at some point she must have doubled the already generous crisp topping because the ratio of apples to topping is 50:50. Possibly more like 40:60!

She and I used to stand in the kitchen impatiently waiting for the crisp to cool enough to take our first bites straight from the dish. Then we would both smile and nod at each other in silent agreement that the crisp topping was the best part. No words necessary. It was all about the topping. 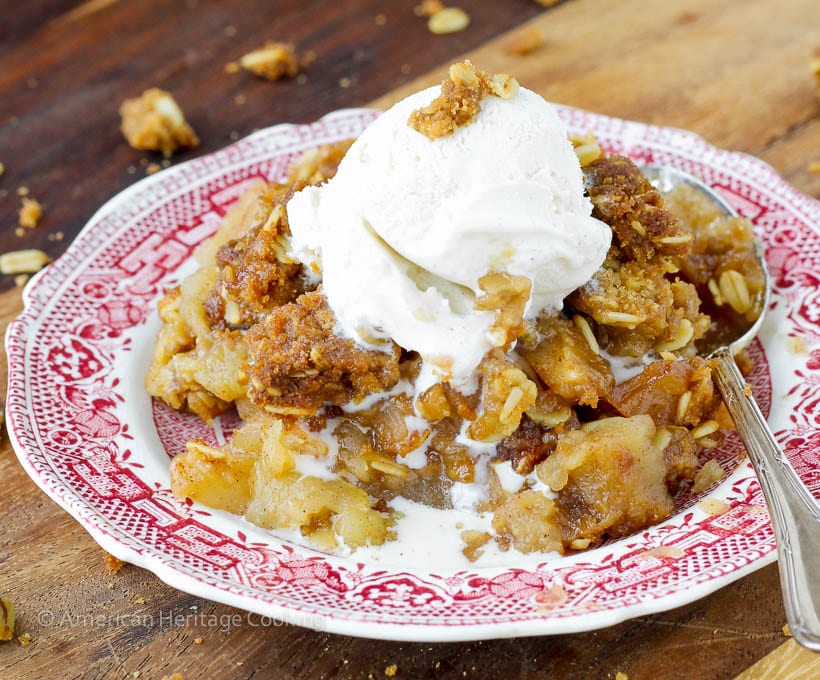 And the obligatory ice cream. This was not optional in my mom’s house. And it still isn’t in mine. 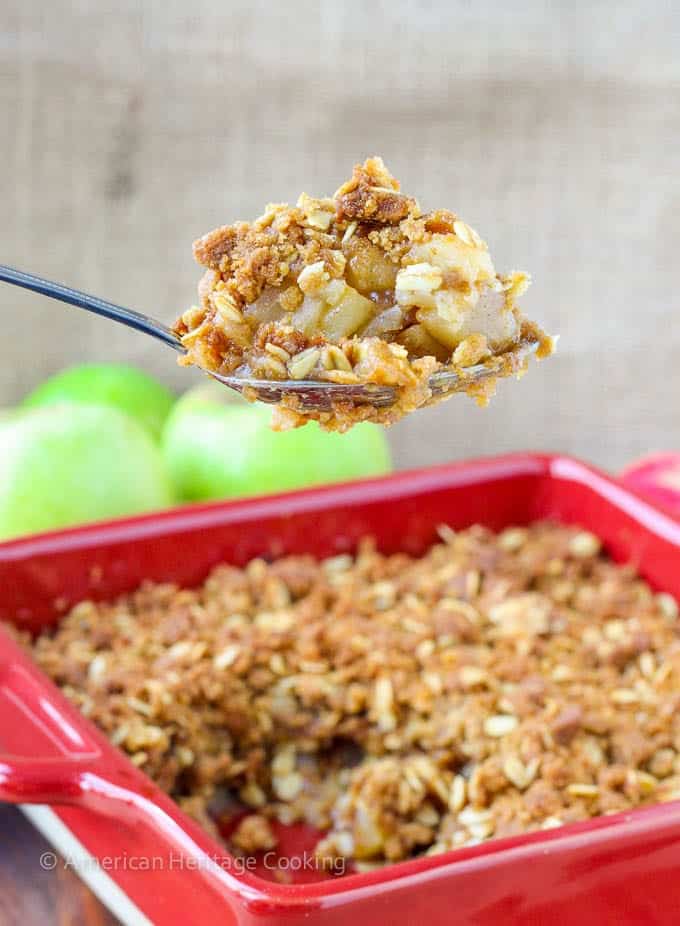 The differentiating ingredient in my mom’s crisp is the dark brown sugar…and lots of it. It makes for a crisp, crunchy and sweet topping that perfectly compliments the cinnamon spiced, tart apples. You must use tart apples or the crisp will be cloyingly sweet. I learned this the hard way in college.

This is one of those recipes that I make time and time again. I’ve called mom dozens of times over the past 15 years asking her to tell me the recipe just one more time and promising to write it down…and not lose it. {I told you I had a problem…} 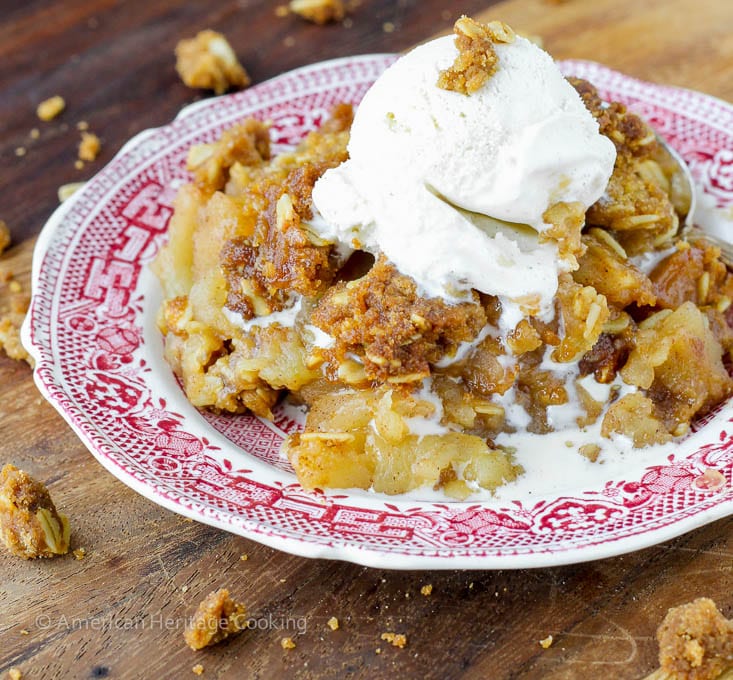 I have added my touch to the filling by adding some lemon juice, fresh lemon zest, a grind of fresh nutmeg and a pinch of salt, but the crisp topping remains unadulterated. You don’t mess with perfection. And the brown sugar crisp topping is, in fact, perfection. 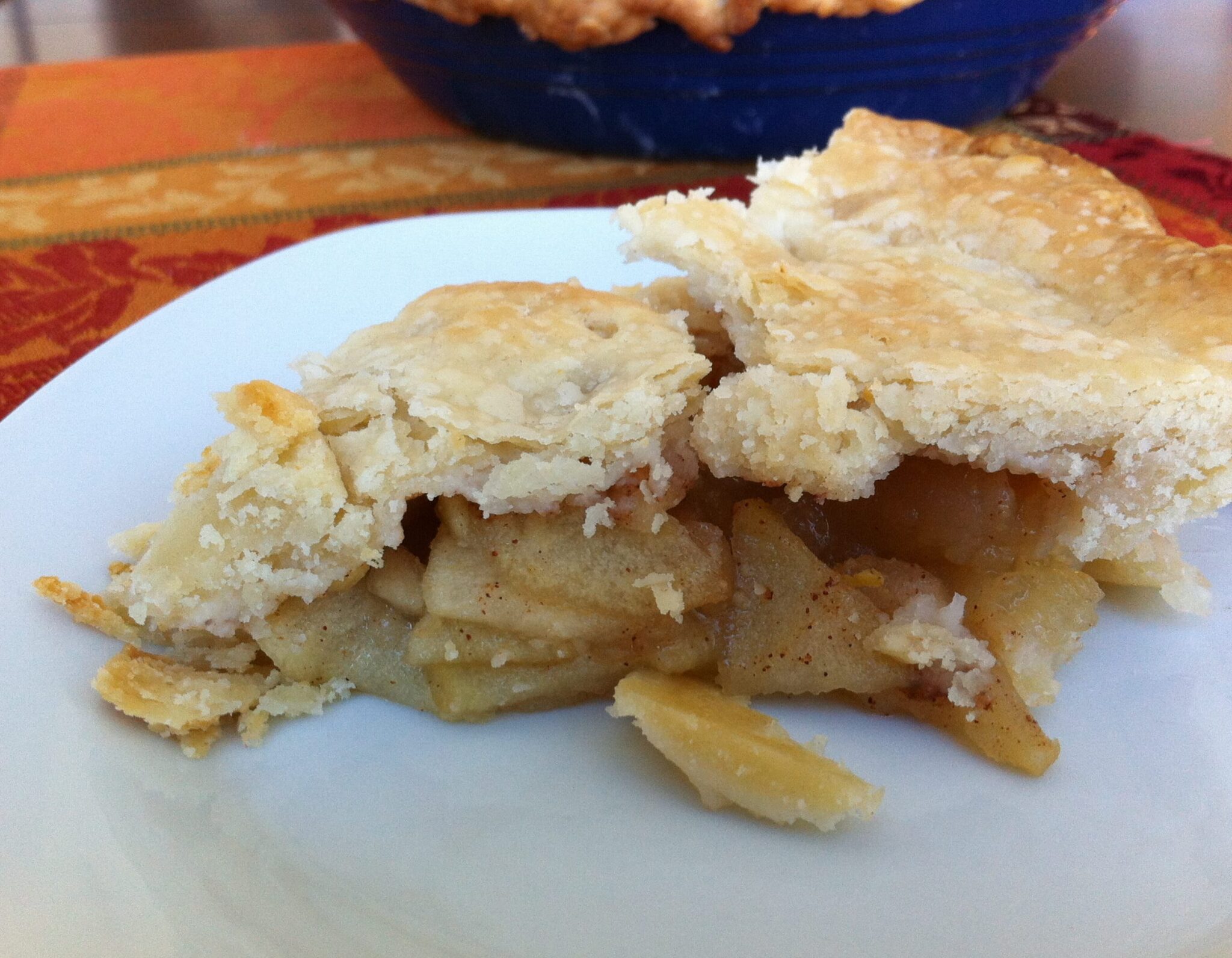 Finally the moment we have all been waiting for… a timeless, historical apple pie recipe! Preparing and assembling the pie filling is definitely the easy part of the pie-making process.

I have been desperate to make a recipe from “American Cookery”, the first American cookbook, and I was hoping that this would be my opportunity; however, the closest recipe to an apple pie was an apple tart and these are her instructions verbatim, “Stew and strain the apples, add cinnamon, rosewater, wine and sugar to your taste, lay in paste, royal, squeeze thereon orange juice – bake gently.” Pardon me, but what? Perhaps the American ladies in 1796 who bought this cookbook had a deeper understanding of the basics of baking than I, but this recipe left me confused. With trepidation I turned to The Joy of Cooking (1st Edition). I never thought I would be so pleased to see semi-exact measurements in a cookbook.